Conditions of Play:
All members must be financial to play for club trophies.
All matches must be played on due date or before.
All ties in competition will be decided by lot, except all gross ties by play off.

HOLE IN ONE: Frank Sandys no6

NEWS:
Pennant teams remain unbeaten after the 3rd round
The scratch team won 11-6 at Tinwald while the Ladies halved for the 2nd time in a row. At Rakaia after a close and hard fought match the Moyes team won 10 – 7 to continue its unbeaten run.

Web site
Thank you to Karyn Robertson at Nor West Arch for a job well done. You will be able to find results and news here as well as finding out about the course for playing and the club house facilities for hire. There are great photographs as well.

Men’s Competition and Championship
Changes to the grades and the championship qualifying have been made by the Men’s match committee.
In order to have approximately the same number of players in each grade the seniors is now 0 – 10, Intermediate 11 – 16, Junior A 17 – 21, Junior B 22 and over.
Entry into this year’s Championships will be not only from 1 of 2 qualifying rounds but also by putting your name on a sheet on the noticeboard. The format to find each top qualifier is still to be decided.
Club Captain is keen to have close to full fields in each grade as possible.

Below: Leyton Blackwell celebrating his Hole in one on the 17th at Methven 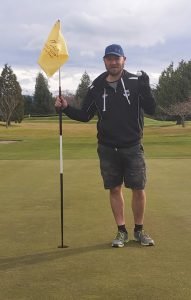 Download Results
A happy Leighton Blackwell headlines the latest Methven golf news by scoring a hole in one recently. His team mate, Kane Hickman, watched him achieve the feat on the par 3 17th. Congratulations Leighton may there be more.

Phil Johnson nearly matched Blackwell in Saturday competition by scoring “a hole in one” and birdie on the same hole!! How did he achieve that you may ask? On No 13 Par 3 Shorty, Johnson watched his tee shot finish in the spare hole! He then putted across the green to the flagged hole and saw it go in for a birdie 2!!

Simon Wareing, James Anderson go back to back in the Duff Trophy
Simon Wareing and James Anderson have gone back to back to retain the Duff Trophy. In the final on Saturday they came out and dominated the match against Richard Maw and Frikkie Greybe. Combining well Wareing and Anderson were 5 up after 9. Greybe then had 3 birdies in a row to cut back the deficit but when Wareing chipped in on 16 the Duff trophy had been retained.

In the semifinals the previous week Wareing and James Anderson had to go to the 20th hole to overcome a gallant Paddy Helmore and Bruce Dickson. After a seesaw first 9 holes Helmore and Dickson led by 2. The next 5 holes were halved until 15th when Anderson put his 3rd just a few centimetres from the pin to win the hole. Wareing won the 17th with a 2 to square the match. The match finished on the 20th when Anderson clinched the match with another superb chip.
In the other semifinal Maw and Frikkie Greybe produced enough good shots to overcome a gallant Geoff Rhodes at the 15th.

Michael Kemp, Ben Rutter take out Middleton Trophy
Michael Kemp and Ben Rutter won the Middleton Trophy after a tight tussle with Ross Breach and Phil Elliott.
After an even first 9 holes Kemp and Rutter took control of the match by winning 3 holes to be 4 up after 13. Elliott landed a massive 50 foot putt on 15 to stay in the match but it was not to be enough as they shook hands on the 17th.
The previous week both semifinals went to the last hole in two tight matches.
Michael Kemp and Ben Rutter prevailed over Dad, Peter Kemp and Jim Lattimore with putting proving to be the difference.
Ross Breach and Phil Elliott took out the match on the 18th against a gallant Alister Maxwell and Dayle Lucas.
The finals are this weekend.

Pennant teams remain unbeaten
In the second round the Ladies Team and Men’s Scratch team halved their matches while the Moyes team had a 11-6 win over the home team, Ashburton. The Ladies and Scratch team lead their competitions while the Moyes Team lies second. There is another round in next.
Below: Richard Maw, Frikkie Greybe, Simon Wareing, James Anderson (Photo credit: Dan McLaughlan) 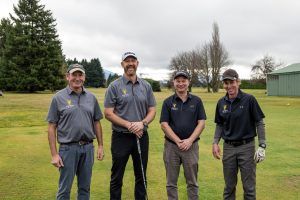 Frank Sandys has his first official Hole in One

Frank Sandys achieved his first official hole in one in Saturday’s competition. Using his trusty 7 wood he completed the ace at the Par 3 No 6 hole in a match against Simon Wareing.

“There were high fives and screams of delight from my playing partners plus players on No 3 and No 7 tees,” a grinning, Frank recalled. One of his playing partners commented, “The ball is heading for the hole!!”
“I could not concentrate for much of the rest of the round. I was being congratulated and high fived whenever I met others,” Sandys added. He celebrated well into the night. It is not his first hole in one but it is his first on a golf course. Years ago he scored a hole in one at a fundraising event at the then Methven High School on the back field. He won a flight and trip to Millbrook. Congratulations Frank. Unfortunately he could not cap of a great shot with a victory against Wareing.

Amazing Simon
Simon Wareing with this win has now won 18 match play matches since the beginning of 2019! Along the way he has won the Intermediate Championship, the Senior Knockout and twice Duff Trophy winner with James Anderson. Congratulations Simon.

Latest News – July 20th
Philip Wareing Ltd is the new Premier Sponsor at the Methven Golf Club for the next three years. The Club Committee and members wish to thank the Wareing Family for the generous support and commitment to the future of the Club.

All our sponsors, large and small, are hugely appreciated by the Club especially in the current economic climate. Thanks to our previous major sponsor Methven Resort. This announcement has climaxed other positive news during the last few weeks.

The course has been busy with visitors from around New Zealand – Auckland, Tauranga, Mount Maunganui, Hamilton, Hawkes Bay, Wellington, Christchurch, Jacks point, The Hills – near Arrowtown, Te Anau, Wanaka and Mid Canterbury Clubs. Feedback has been positive with many vowing to come back to bring their mates, the course is everything that we were told about, amazing scenery and beautiful greens.

Our new website has attracted plenty of interest and has resulted in three new members. This just continues the resurgence of membership since March. Remember we have special membership deals for Under 35s and Under 25s.

Competition News
Dayle Lucas led the way on Saturday in the drizzle with a superb 72. It meant that he won the seniors, had the best gross, best nett along with a two and two closest to the pins – a great haul. His 72 is now the best gross for the season, eclipsing the previous best, a 73, which he scored. Congratulations Dayle.

Craig J Middleton was just 7.5cm away from a hole in one on Shorty with a great tee shot on the par 3 13th hole. It looks like a hole in one will have to be achieved for Middleton’s shot to miss out being the closest for the season.

The Penney Pennant Team did not fare so well at Mayfield on Monday being soundly defeated 13 – 4. Even the No 5 and 6 Methven players (who will remain nameless!!) managed to be beaten 5 & 3 by one player.

Remember green fees are half price for July. Enjoy your golf.

Family Member     $450
Entitles a full member to bring your ‘immediate’ family on to the course at no charge but the member’s guests will not be able to attain a handicap.

Junior Under 25     $150
Restricted to a member who has left school but is aged under 25 years on 1st April. Proof of age may be required. This membership carries full playing rights.

9 Hole Member     $285
Nine holes only to be played on any one day but can play every day. Also permitted to play in the Opening Day, Closing Day and the Christmas Tournaments.

Country Member     $205
Must be a full member of another club. Cannot play in Club Championship.

Associate Social Member     $65
Entitles member to play on Opening and Closing days only.