News stories are added on a regular basis. For archived items, please contact the Golf Coordinator.

Methven enjoys a successful week at interclub competitions
1. Interclub Results
The Penny Pennant Team recorded its first win last week with a comprehensive 12 1/2 – 4 1/2 win over Grande Vue. A happy Gary Foy said the players overcame the miserable conditions to enjoy the win. Well done. Not to be outdone the Moyes team continued on its winning way, also in miserable conditions, on Sunday by winning 12-5 to remain unbeaten. Likewise the Redpath team continued on its unbeaten run with a 10-2 win at Geraldine. The Ladies Sunday Pennant Team suffered its first loss on Sunday 3 1/2 to 8 1/2 but still leads the competition by one point. Congratulations to all players for playing in the wet conditions. Keep it up.
2. John Deere Tournament at Weedons
The 14th annual John Deere Sponsored tournament was played yesterday on a wet Weedons course and Methven was amongst the prizes – claiming three of the four closest to the pin prizes. Phil Johnson won two of them and Paul Plimmer one, while Phil was the first name on the 3rd.
Along with Bruce Dickson the team enjoyed the 3 ball elimination scramble event format that was played. 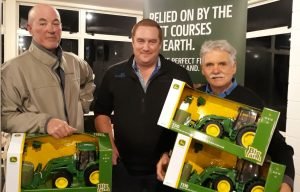 Duff Trophy and Middleton Trophy winners have been found
The Duff Trophy ‘giant killers”, Barrie Begg and Chris Pannett have won the Trophy. In the final against Peter Harper and Mark Gazzard it was a close and tight affair until the 14th hole. Begg and Pannett won it to go 2 up. After halving the 15th the victory was sealed on the 16th hole. The lowest qualifiers were able to enjoy the moment and reflect on their achievement. “We had plenty of luck.”
Pete Wood and Piers Rolton combined well to win the Middleton Trophy. They defeated last year’s winners, Michael Kemp and Ben Rutter. Such was the winner’s dominance they did not concede a hole in the match. The match was won at the 14th.
In the semi finals the previous week, all four finalists had played well.
In the Duff Trophy, Barrie Begg and Chris Pannett continued their unbeaten run to come from behind to beat Frank Sandys and Eric Grimwade. They, however, had a bit of golfing luck on the par 3 17th. Pannett’s tee shot hit a tree branch on the right hand side of the fairway. The ball then deflected on to the green. This allowed Pannett to halve the hole and maintain a 1 up lead. They duly won the 18th to reach their first Duff Trophy final.
In the other semi-final was just as tight between Peter Harper, Mark Gazzard and Paddy Helmore, Geoff Rhodes. In a thriller Harper and Gazzard finally prevailed on the 19th.
In the Middleton semi-finals defending champions, Michael Kemp and Ben Rutter, combined well to defeat Steve Schwass and Jim Rooney in a close match.
In the other match Pete Wood left his best to last with the winning putt on the last hole to win with Piers Rolton. Gavin Santy and Mike Gray fought hard but their efforts were not quite enough. 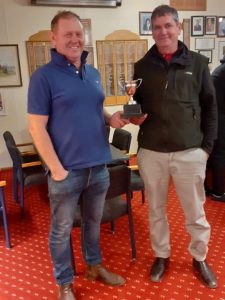 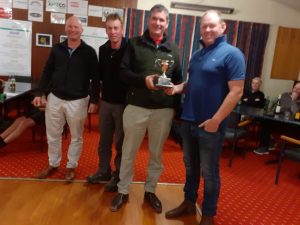 Have a Go at Golf Family Day Great Success

The Have a Go at Golf Family Day on Sunday at the Methven Golf Club was a great success. The afternoon of Snag golf/Futures and playing a few holes on the course attracted a total of 40 children and adults.
Aorangi Golf Development officer, Graham Keen set up Snag golf targets on the putting green. The children, encouraged by their adults, putted and then chipped to try to hit the centre of the target to score a one. The aim was to get them to learn to line up with the target and watch the ball while they hit the ball.
With the new knowledge they joined the adult family members and played an ambrose for a few holes on the golf course. The afternoon was completed with a BBQ and drinks at the clubhouse.
Graham Keen was very pleased with the turnout and response from the young promising golfers. The Methven Golf Club’s Junior subcommittee welcomed the Families, who came on to the Golf Course for the first time. Junior Coaching and playing a few holes is on a Sunday morning from 10am. See you there. 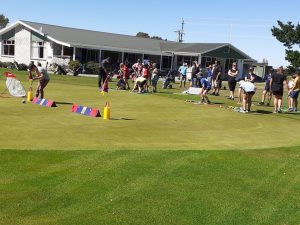 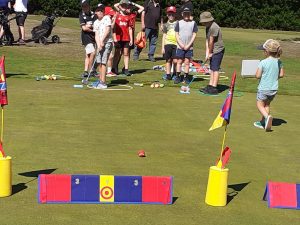 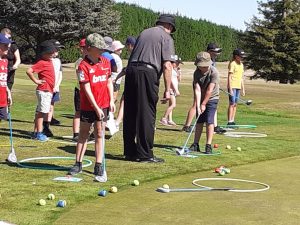 On Saturday 6th March a team of 20 players representing the Methven Golf Club travelled to Hororata Golf Course to contest the annual Coleridge Shield Competition against teams from Hororata, Waimakiriri and Greendale.

On a fine autumn day on a well-presented Hororata Course, the players did well, with Methven finishing runner up to the home team with a combined Stableford aggregate of 630 points. Outstanding for Methven were Alister Maxwell with 40 points, the 2nd highest individual total on the day, and Heather Middleton with 39 points, the highest ladies’ total on the day.

Burrell-Smiths win Jubilee Trophy on Methven Golf Club’s Opening Day
Sharon and Clinton Burrell-Smith won the Jubilee Trophy on opening day of the 2021 season at the Methven Golf Club. They combined well to record a nett 611/2 to win by four shots from Fay Redfern and Ian Lucas.
Men’s Captain, Piers Rolton welcomed the 50 players and wished them well for the coming season.

Then promising, young golfer Frida Wood, on behalf of President, Pete Wood, hit a great drive straight down the fairway to begin the 2021 season.

The warm weather and superb course conditions allowed for some good scoring. Marc Davies took the honours in the single person draw with a nett 66. He was closely followed by Jim Rooney and Athol McAlpine. A BBQ followed to ensure a great start for the season.
On Friday the 9 holers had a successful bring a friend day. From reports several of the friends showed that they had lost none of their skills after many years away. Well done. The previous Friday the players enjoyed a morning at Lake Hood playing the par 3 course as a nice change.
The Ladies have their first competition day for the season on Wednesday with the Men on Saturday. 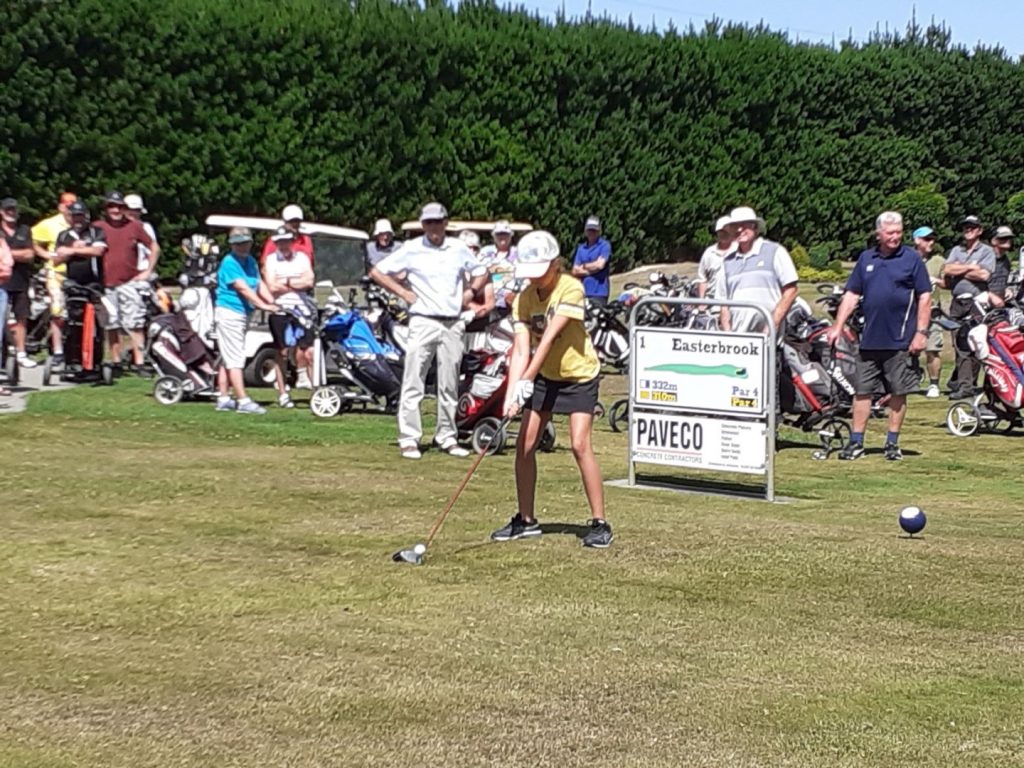 Ross Breach, Michael Kemp, Alister Maxwell, Steve Schwass have combined to win the Norton Francis Golf Trophy at the Christchurch Golf Club. It is the first time that Methven has won the prestigious trophy which has been held for many years.

The Trophy (named in memory of one of the founding members of the Christchurch Club) is played for each year but because there are so many Clubs in Canterbury each Club is invited every two years.

The format of the tournament is unusual – it is a nett par four ball (birdies are worth +1, pars 0, bogies -1).
Methven totaled +12 to win by just 1 point from last year’s winners Rakaia.
By winning this year Methven will be invited to defend the trophy next year.
Congratulations. 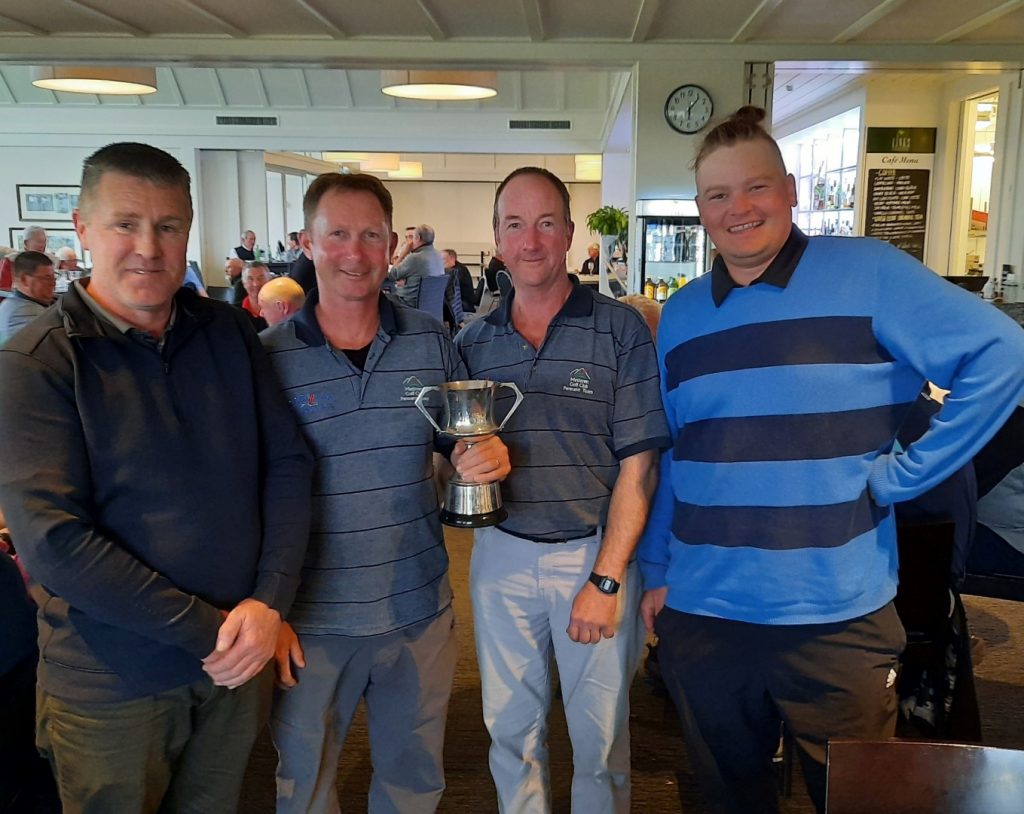 – The “Snowdin” Trophy was defended successful against Ellesmere at the Methven Golf Course led by stand in Men’s Captain, Bruce Dickson, with 42 points closely followed by Peter Harper with 41.
– At the Aorangi Secondary School’s Golf in the holidays Sam Ree was rewarded for his practising by winning the two tournaments. Congratulations Sam.
-Angela Mowbray and her playing partner won the Lower Waitaki 2 Day Tournament as a warm for her representing Aorangi at the South Island interprovincials where she won one of her matches.
Win at Aorangi Champion of Champions Tournament at Denfield Geraldine.

Steve Schwass, Matt Duncan and Geoff Rhodes won the Best Nett team prize and was only 1 point off winning the overall gross prize
Steve Schwass finished tied on 74 after 18 holes in the seniors and was forced to a playoff. In a dramatic playoff Steve’s putt on the 1st playoff hole lipped out for the win while on the 2nd the ball lipped out again but this time it cost him the match. 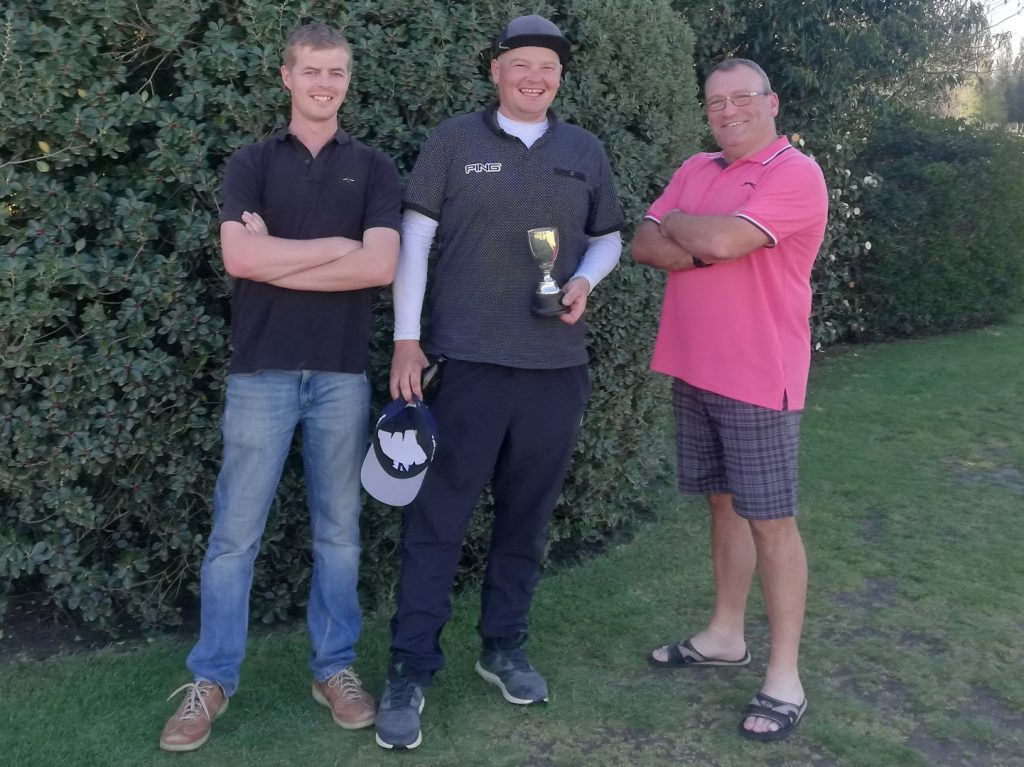 There were close, exciting matches in the Methven Golf Club’s Championship Finals on Saturday. Held in superb conditions over 36 holes it was Matt Duncan who prevailed over Paddy Helmore to win the Intermediate Championship with his last putt. Similarly it was Sam Clark who won on the last against a gallant Geoff Rhodes to win Junior A. In the Silver Final Angela Mowbray retained her title but was taken to the last by a fighting Robyn Maw. The new Senior Champion is Steve Schwass who overcame a gallant Craig J Middleton while Peter Harper won the ”Battle of the Peters” to take out Junior B from Peter Kemp.
Ellen Kemp played consistently on the day to overcome Ruth Smith in Bronze A while Bev Isherwood’s recent good form carried over to the final to win Bronze B from Gail Limbrick.
In the Senior Knockout John McGettigan beat Alister Maxwell while Mike Gray won the Junior Knockout.